1, it may be a long time, feeling more serious problem of focusing. Especially when the size is enlarged to two meters, it cannot be adjusted. There is not much impact on the picture, that is, there are always several words in the subtitles. The picture of the movie is well tuned. When I return to the program interface, I see that the focus is declining. Obsessive-compulsive disorder really can't bear me.

2. I wasted more time on the PaPa pocket cinema during the use process. In contrast, I think it is a system problem. The official channel only provides one ROM. There is no news after V1.2.0.2, 2015-9-11 update. The use of the problem is a variety of card machine, for example, after the boot Bluetooth prompts are not open, select the settings with the remote control, the remote control is good or bad (I have suspected the remote control problems many times, after five batteries were identified System problems) but the mouse can be used. Then you can't enter the program page. Most apps will get stuck and flash back. For example, the game is seeing a climax, the key part flashes back and you don't see it, and the number of times is not beautiful! Try to re-brush machine may not be the same version. The problem also exists after emptying and restoring. Suspected to bring the issue of the Luncher, the installation of the shell after the desktop to solve a lot of problems, and the visual and control than the own smooth. In addition to official announcements, the official forum is a small advertisement. It feels that manufacturers are trying to shrink their heads and the turtles do not know how long they can persist.

3. The experience of using touch buttons is too bad. There is no touch feedback, no response to press, and it is uncertain whether or not it is accurate. This always makes me angry. When the remote control, mouse, and body keys were all invalid, I couldn't help but lick it and the RESET button was promoted to the most effective button. PaPa Pocket Theater makes me feel so picky, there is always a kind of voice that echoes in my mind: Is it time to let go?

Going to work every day facing the screen, looking at the phone off work, had long wanted to start their own projector, in addition to enjoyment, the stimulation of the eyes is much smaller. The recent mini-projector competition is very fierce. It happens that my friend sent me a PaPa pocket cinema. The palm of the hand is portable and easy to use. I am still looking forward to it before using it. After using it for a month, I feel that there is still much room for upgrade. Let us take a look.

Appearance: simple but not exquisite

A brief introduction on the back of the box 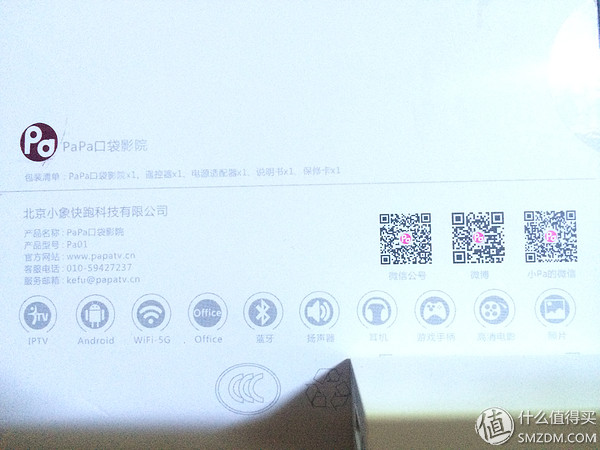 Machine and accessories photo. The body is very small, the top of the fuselage has a simple touch button, more cool but very practical. The charger is 2A, normal use of micro-heat, sometimes pulling the power will also cause the system to restart. The tripod is plastic, barely enough. that's it. 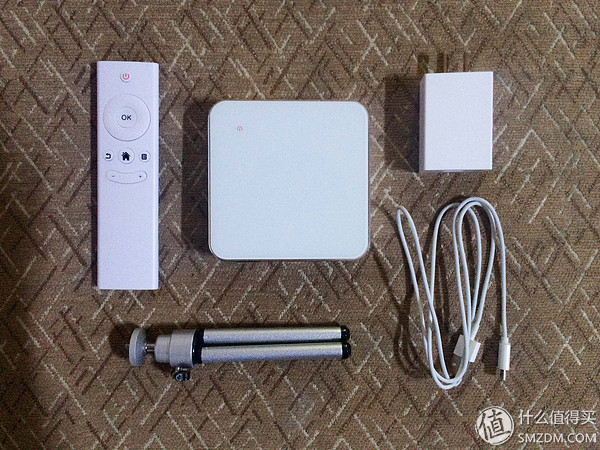 The material of the remote control showed a sense of cheapness. Since it was a straight design, my hands were less jealous and the remote control of the Lynx Box wanted to throw it away. The paper manual did not write the plastic spacer of the remote control to get it down. The first time it was used without attention, and it was only after detailed investigation on the website that I was low IQ. 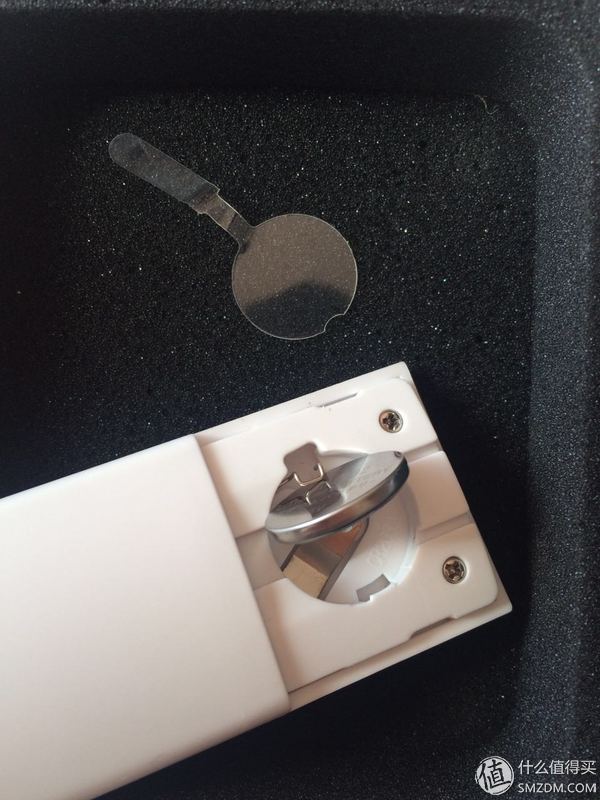 The tripod can be lengthened by 1 and it will barely fall when it is projected upwards. If you lie down, you have to stop. The black square is a projection lens, fixed, and then explained in detail, the other corner is a remote control receiver, a look is infrared, very sensitive, to practice Duan Yu's six-pulse magic can it! The knob on the side is used to adjust the focus. When adjusting the image, the image will move slightly along the elliptical trajectory, which will cause Virgo to always adjust the level! The next three bars are horns. To allow me to use the word horn, I can also say a word! 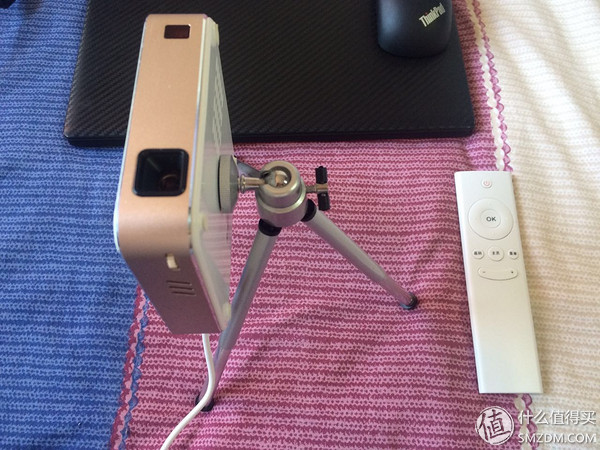 This is the bottom. The large exhaust outlet, in fact, there are exhaust outlets on the side. A normal boot can cause the fan to make a mad turn, but the sound is still acceptable. The phone measured it for less than 40 decibels, probably with headphones. 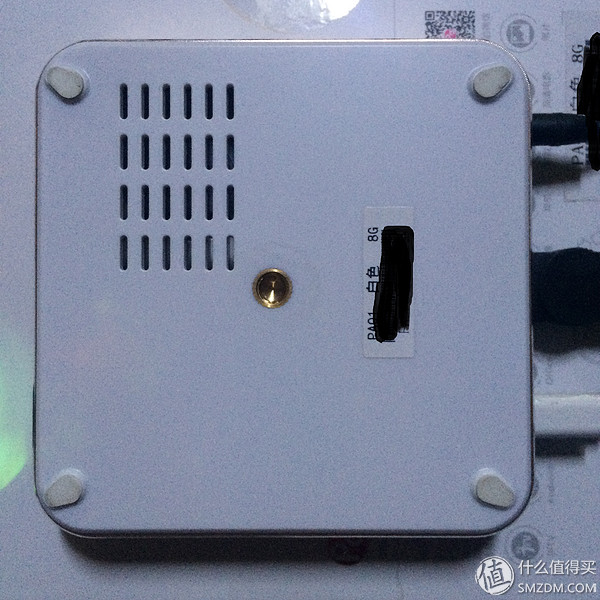 This is the back, headphones, TF card, USB2.0, Reset, charging port. USB is actually low speed, and it is estimated that the speed of TF is not much better. In this era, I can't believe it. USB can insert U disk, mouse. In fact, mobile hard disk is also possible, that is, card can fly. By the way, there is no HDMI, giant pit! Giant pit! Giant pit! Directly led to this pocket projector down one level! The red disk drive in the computer is a small USB flash drive that can be dumped! In addition, the wireless program's performance on this stuff... Forget it or not, and it's annoying. 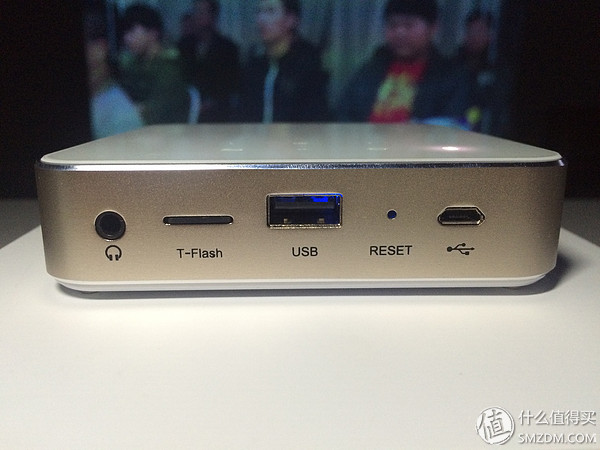 Even if the machine is stationary, the projection will move when focusing. So I want to open and see if I can optimize it. Open the bottom of the mat, you can see the deep inside the screw, twist the lid can be opened to see the bottom of a variety of components dense, I do not understand it. 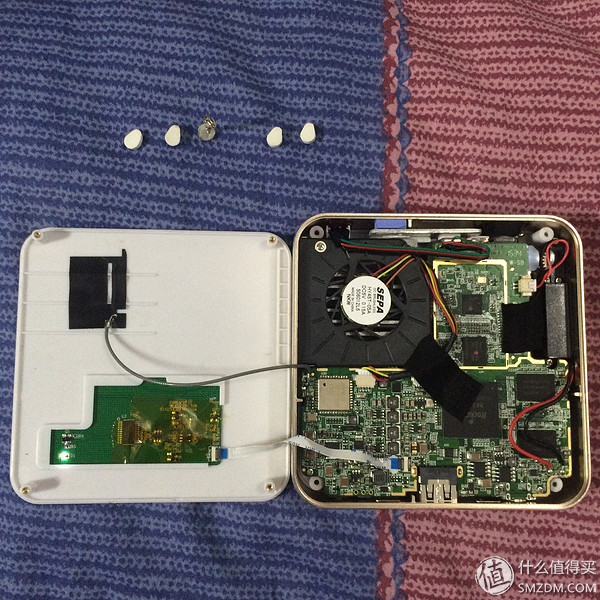 Open another layer, the huge battery can't be maintained for two hours, and the huge remaining space is too wasteful! 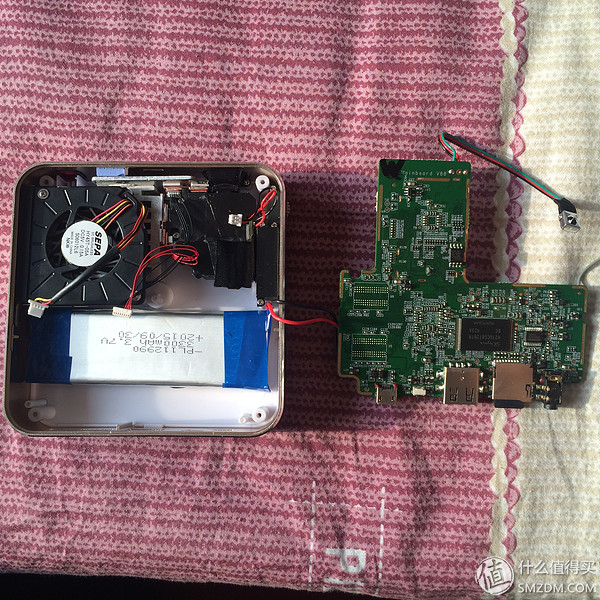 Here, you can see a simple mechanical structure. The black shaft of the black wheel driven by the white wheel is on the side, which can push the lens to move forward and backward. The problem that the projection is tampered with in the focusing process cannot be solved. It is also emphasized that trapezoidal correction is not supported, resulting in severe pain when used without HDMI. 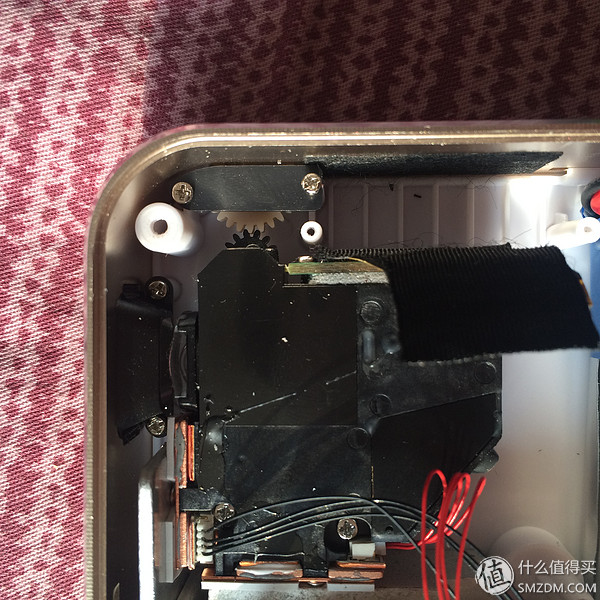 The pain of the so-called positive projection is to keep the projector on the extended line in the center of the screen, where there may be no landing in the sky, and it is never the middle of the vision. As long as it is paralyzed, the projected image is distorted. Fortunately at home, you can think of ways to adjust. The company's desk is basically flush with the bottom of the curtain. The papa projector needs to be adjusted to a very high level. Outdoors must be equipped with a tripod with a high enough height. A tripod that is randomly presented may not be high enough. This is the rhythm of the death of Virgo, and the advantage of being portable disappears. 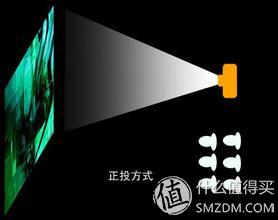 It's okay to play on the desktop without padding, and the brightness at close range is not bad. 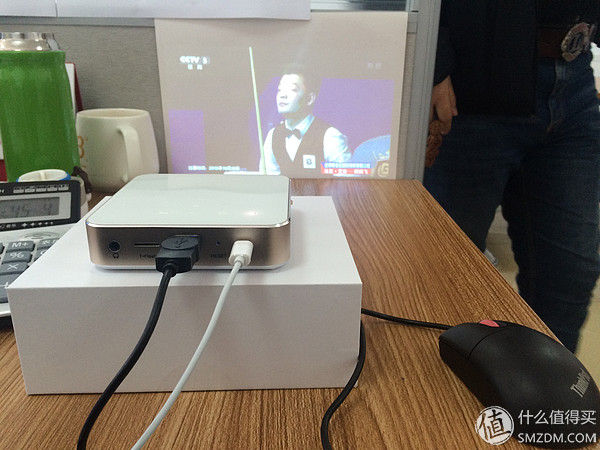 Small speaker, can make a sound 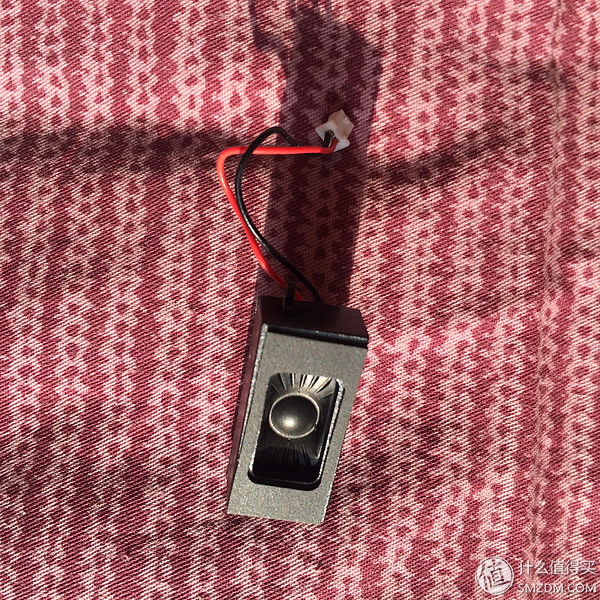 As a box product, compare the differences 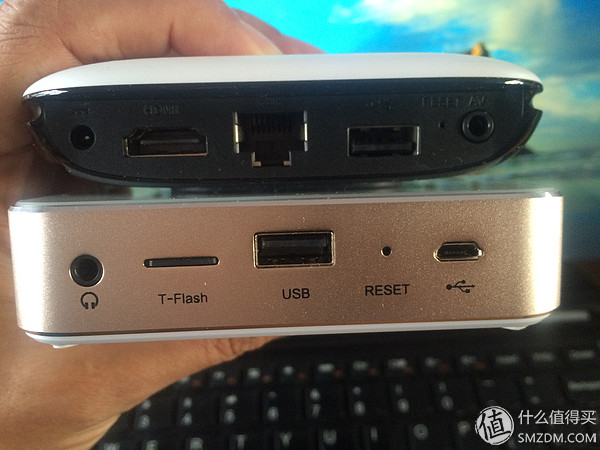 Although the remote control of the Lynx Box is a little thicker but it can hold a good sense of convenience, and can be used to purchase a convenient No. 7 battery at a low price, the texture of the imitation skin is really good! Love the remote control from now on! 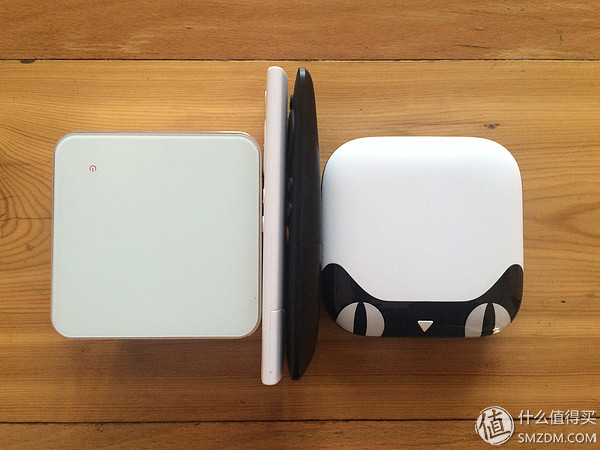 Projection can project up to 100 inches, and the size of 16:9 is 2.21 meters and 1.24 meters. It can be realized at a distance of more than 2 meters. However, I do not like 100-inch. On the one hand, it is the trouble caused by the positive vote. It is like watching people's mobile phones. The photo angle is the real viewing angle. On the other hand, this size is full of graininess. Watch the big LED screen as close up. The parameters will not be sunned, and the true data will be lost. Anyway, this brightness can only be seen in the evening, but also the highest brightness. When I look at the camera at night, Iphone's flashlight shines behind the projector. The projection is not clear. Not to mention the lights. In the black background, you can also see the slight light leakage around! 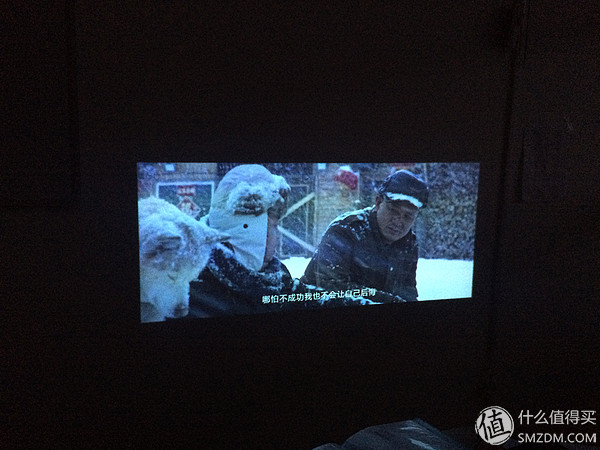 Some of the self-contained APPs have their own market. The content of the market is not very complete. The white file manager is still easy to use, but the network sharing is very easy to get stuck. The receiver of the remote control is projection-oriented, and it is often insensitive to operation. It will not work at the receiver. Pressing it often will make it impatient. When testing other desktops, it was found to be a bug in the body system. Finally, when the desktop was selected, the situation improved a lot. 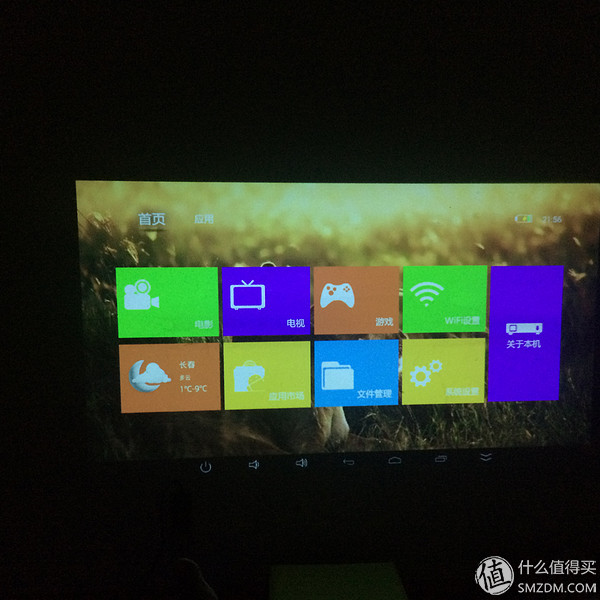 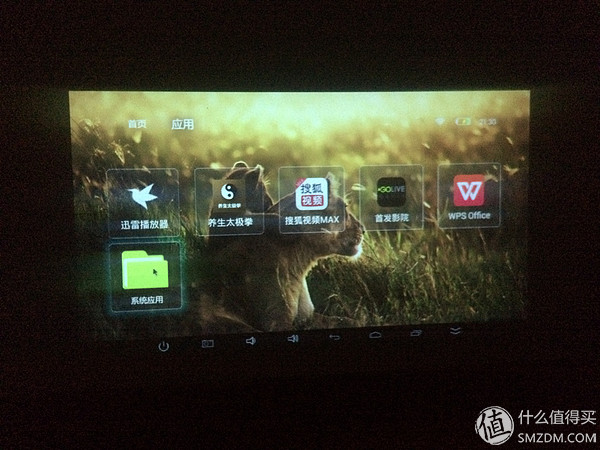 When used, it was found that relying on the remote control operation was too whimsical and purely self-flagellating. The solution is to use a mouse, but also use a wired mouse, because the unit does not buy a battery? Because Bluetooth can support the headset, but does not give Bluetooth mouse face, is not even connected! Connecting or canceling Bluetooth operation can only be done with the mouse. Say heart to heart! 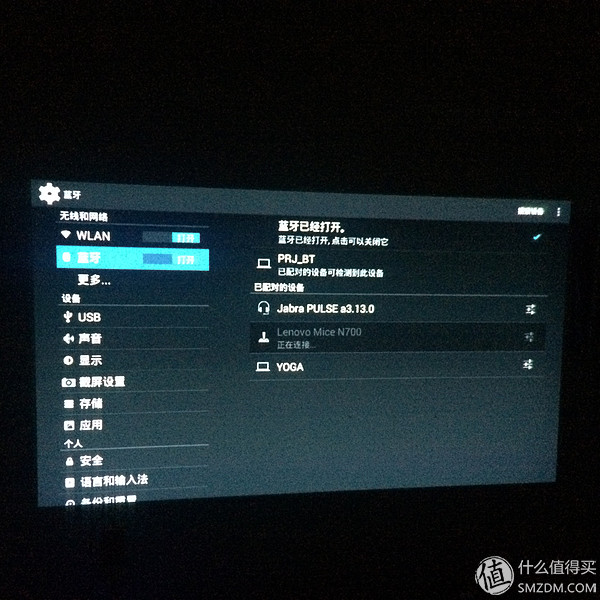 But Bluetooth can link computers, thinking that there is no HDMI, wireless solutions?

There are also some interesting things in the settings, this is only the phone, tablet it! 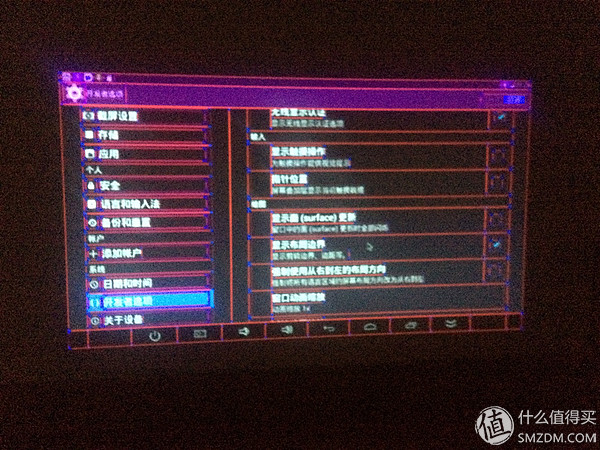 A mouse is much more convenient, and it's found that it's the same with the tablet. There's something down there! I really want to slide! The most annoying background running, originally on the card! 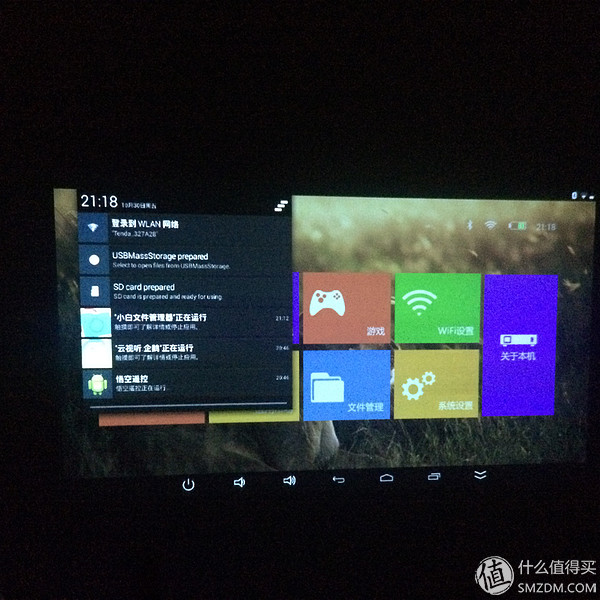 The bottom is quick, and occasionally the program can be forcibly closed after it has died. 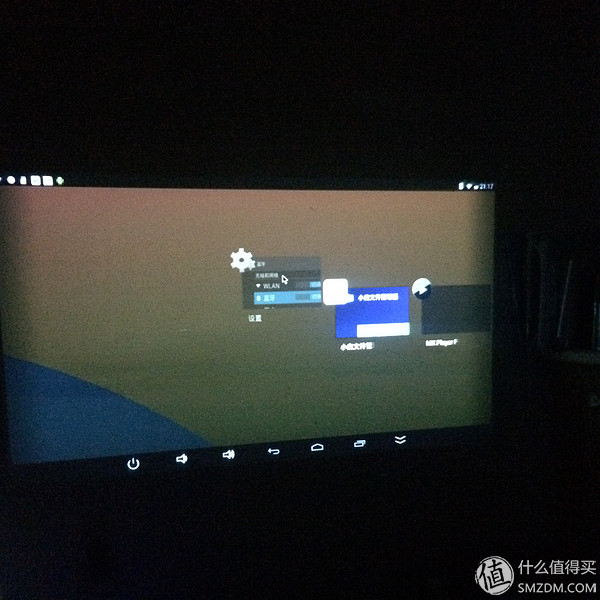 Plug the card into the U disk can pop up tips, still considerate. The only way to do this is to play a file that exceeds 1G. 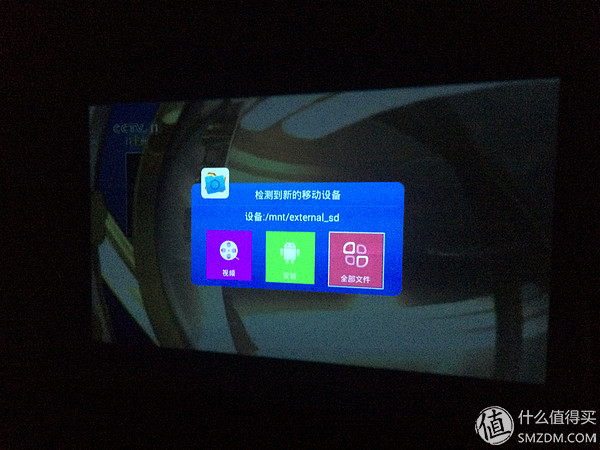 What happens to LAN sharing? Unable to insert subtitles! By the way, this is the light effect before sunset. 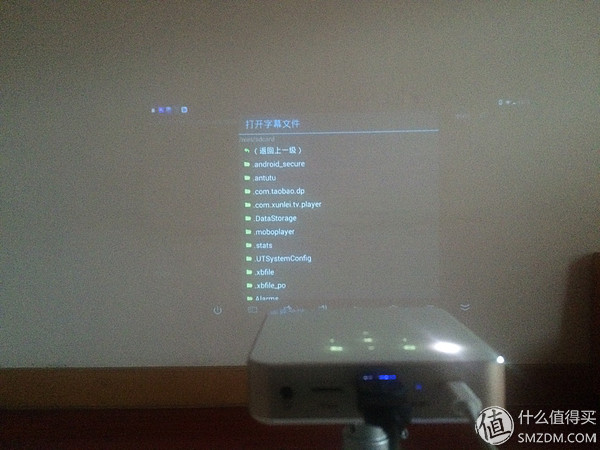 Later installed a number of desktops, tested a number of APP, the body system should not be optimized. Doesn't it mean that the Tmall box is abolished? It is smoother than this papa.

Of course, Jingdong and a certain treasure can be purchased, the price of Â¥ 1499.

Disadvantages: The body is too small but not worth it: does not support trapezoidal correction, no HDMI and other experience brings backwards, resulting in outdoor, office and other scenes can not be used contrary to the official propaganda; system bugs affect the use of comfort; body touch buttons are not sensitive .